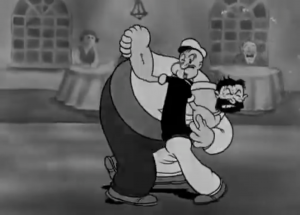 Men can dance with each other – as long as long they fight!

Popeye tangos with Bluto, 1934 [link to their dance – below]

I am researching a paper about historical cartoons of men dancing tango with each other. Why is it [supposed to be] funny? What is being attacked?

Here, Popeye dances a tango with Bluto. Bluto has just executed a particularly violent “Apache Dance” throwing Olive Oyl around and so enraging Popeye. They fight – Popeye suitably pumped up on spinach – as if dancing tango.

Premise: men do not, should not dance together – so that’s why it “funny”.

Popeye is actually fighting for Olive Oyl’s [heterosexual] affection and Bluto is so groggy from Popeye’s punches he has no choice.

In both cases, virility is preserved!

“Popeye The Sailor Man-Episode No.016 (The Dance Contest) (1934)” – and if you watch the whole cartoon, “Dancing with the Stars” (US) or “Strictly Come dancing” fans might note Wimpy’s neat way of eliminating losing couples…

This is a link to clip where they dance: https://youtu.be/PklhhitB9UI?t=5m23s”