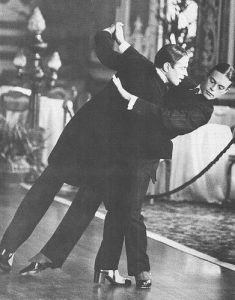 Ray Batchelor writes:
“Here is a video clip of that dance from the film: https://youtu.be/qRlWUaIbTco

I can remember a time and place – the 1970s in England – when each and every representation of gay men was a cause for discussion and often celebration. I am mindful that this film was produced in such a climate – and it is interesting that Nureyev, who was gay, was playing Valentino who had his masculinity impugned (but who, contrary to a combination of bad scholarship and wishful thinking, almost certainly wasn’t gay), but who, as his performance in ‘the Four Horsemen of the Apocalypse’ shows, was a skilled tango dancer. As the YouTube clip shows, this 1977 dance with Anthony Dowell was a tango more in spirit than execution, but notable as a further example of the dance being popularly associated the erotic, and sometimes the transgressive.”