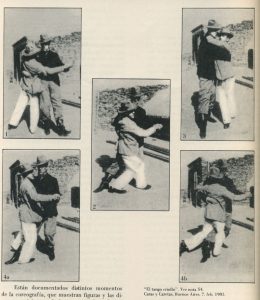 Ray Batchelor writes:
“Downloaded from the website of Tangology 101, where this caption accompanies it:
1903 – El Tango Criollo
In 1903, the Buenos Aires publication Caras y Caretas published the first known photos of someone dancing tango. The photos featured Arturo de Navas leading another man. Navas was a well-known dancer and friend of Carlos Gardel.

One thing that I think is particularly interesting about this image is that the label says, "Tango Criollo." This was a common title during this period and appears on lots of tango sheet music.

Another much circulated, reproduced and interpreted image or set of images. They are remarkable not only for what they show – two men dancing together – but also that were published in a popular publication in 1903. I cannot verify if this ‘the first known photos of someone dancing tango’. The ‘label’ referred to by the Tangology 101 author is, I suspect a later caption – perhaps from the 1965 book, “Tango en la sociedad porteña 1880-1920” by Hugo Lamas and Enrique Binda and recently [I am writing in 2016] reprinted by Abrazos based in Germany. http://www.abrazosbooks.com/IE/index.php?p=61 I have yet to read it, but have it on order.”