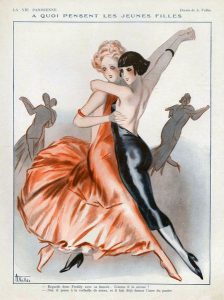 – Then see Freddy with his fiancee … As it shakes!
– Yes, he thinks of the wedding basket, and he is already dancing the handle of the basket

A much reproduced image which – apart from intuiting which dance it is from the embrace and the attitude, is not expressly labelled as a ‘tango’. French visitrs to this website may be able to help with the oblique french. A Google image serach for ‘La Vie Parisienne’ reveals that its illustrations were often desinged to titilate (men), and this one appears to be no exception.”