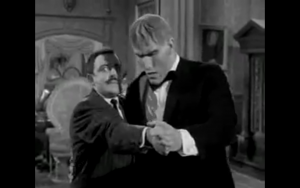 Ray Batchelor writes:
“According to Wikipedia, The Addams Family began as a strip cartoon by Charles Addams in 1938, graduating(?) to TV for two series between 1964 and 1966.

It strikes me as interesting that – on present showing – there seem to be far more cartoons and comic images of men dancing together than there are of women. Why? Are women dancing together not as funny? Are they less threatening, so that they do not need the release of laughter to neutralise their power?

In this short clip, all the cliché characteristics of tango – in it’s show form, perhaps – are referenced, not least tango as a site of intense sexual experience, hence the ‘humour’.

This clip was drawn to my attention by London tanguero, Jonathan aka “Golden Blaisedale” on Facebook.

Here’s the link to the video clip: https://www.youtube.com/watch?v=hvnfsIxweVk&feature=youtu.be”