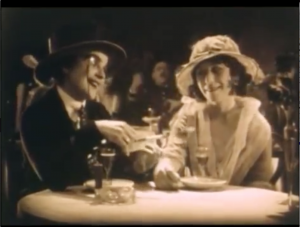 Ray Batchelor says:
“As I wrote in my paper, “Tango teas, trousers and autonomy: images of women dancing with each other in the early 20th century” given at POP Moves Conference, Im/mediate bodies: Materiality and mediation in popular culture, 15 October 2016
“A Scottish tourist in Paris and former resident of Argentina, the politician, Robert Cunningham Graham, published his impressions of the tango in 1914 and they were not favourable. Arriving at a Parisian hotel the ladies:

…descended delicately from their cars, offering a fleeting view of their legs covered by transparent stockings, through the slits of their skirts. They knew that every man […] would be excited by such a spectacle […] and even the most virtuous sense pleasure at their capacity to disturb men’s emotions. […] This is how without a need for the vote, they demonstrate they are equal to men.

“Once inside the hotel, “the atmosphere is charged by the emanations of the flesh and the fumes of whisky”. There is worse to come: “Lesbos had sent her legions and women exchanged intelligent looks […] The color of their cheeks accentuated when their eyes met, unexpectedly, those of another priestess of the secret cult.”

This image is taken from “…the less well-known tango scene from the 1921 Rudolph Valentino film, The Four Horsemen of the Apocalypse purporting to show a Parisian thé dansant in 1913. It may or may not be accurate, but in a few short minutes it depicts Cunnigham Graham’s accusations, almost as if they were a check list including – be quick or you’ll miss her – a butch, monocled lesbian taking tea with her simpering, feminine lover.”

These women are not dancing in this image, but presumably, they might have done. Why else would they be there?

Source for the text: https://www.researchgate.net/publication/312300839_Tango_teas_trousers_and_autonomy_images_of_women_dancing_with_each_other_in_the_early_20th_century

I made the still image myself from the video of “the Four Horsemen of the Apocalypse” found on Youtube: https://youtu.be/bVcmWki-uJY”