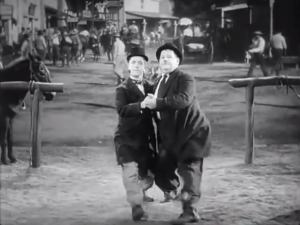 Ray Batchelor writes:
“A clip from the 1937 Laurel and Hardy movie, “Way Out West” in which the Avalon Boys sing “At the Ball, That’s All”.
This is the link to clip – be patient… https://www.youtube.com/watch?v=LAmb4dVJAmU
One comment left on YouTube (link below) says “August 29th 2016 is the 100th anniversary of the death of J. Leubrie Hill, composer of "At The Ball, That’s All" (one of the most successful ragtime songwriters in the business).” An African-American musician, he wrote the song in 1913 for a show he wrote called “My Friend from Kentucky” which he produced and starred and which played in Harlem’s Lafayette Theatre. (https://www.loc.gov/item/ihas.200038843/ accessed 1st November 2016). 1913 was the height of tangomania – and the lyrics include a reference to “the tango jiggle”.”
What do you belive the copyright status of this image to be?
Ray Batchelor believes: “The image is out of copyright.”
The image url: