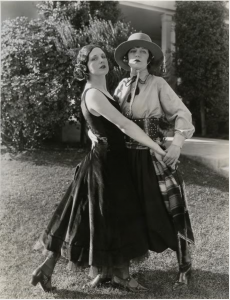 Ray Batchelor writes:
“This is another photograph taken on the occasion of the one shown here as image No: 000055. According to numerous Pinterest appearances of the other photograph, “Viola Dana and Shirley Mason appeared as Mr and Mrs Rodolph Valentino in the Actors’ Fund Benefit Show in Los Angeles and scored with the Argentine tango.Photoplay Magazine, 1924” https://uk.pinterest.com/pin/279152876873526577/ for instance. The women were sisters and Dana was a successful silent movie star.

It seems to me that – for reasons yet fully to be understood – there have been more male, comic, same-sex couplings both in photographs and artwork than there are female ones. this is welcome exception. Might it be that the male one is seen as more transgressive?”