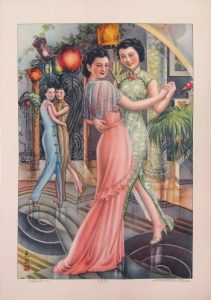 Ray Batchelor writes:
“Taken from an article by Walter Nelson and used by him as evidence of historical same sex dancing. http://www.walternelson.com/dr/same-sex-dance

No source is given by Nelson for the image so it is impossible to say which dance they are dancing. It could be tango.
Andrew David Field writing in his book “Shanghai’s Dancing World: Cabaret Culture and Urban Politics, 1919-1954” p. 27, says: “Tango arrived in Shanghai as the first new dance to infiltrate the city’s ballrooms during the [First World] war years…The Argentinean tango first appeared in Shanghai in 1913, when a pair of dancers performed it at a restaurant known for introducing new dance steps there. Its popularity soon gave rise to “tango teas” held in the western district of the International Settlement like those introduced in 1914 at the Astor House ballroom, which attracted over 200 guests. The tango continued to gain popularity in the Great War years, but soon, simpler dances such as the foxtrot and one-step eclipsed it in acceptance.”
https://books.google.co.uk/books?id=T6LRZylYgQgC&printsec=frontcover&source=gbs_atb#v=onepage&q&f=false
….which might mean that it is some other dance.
According to Juliette McDonald, Head of The School of Design at Edinburgh College of Art, this and last image in the Archive are “are examples of Yuefenpai – a calendar poster art genre which drew from western-style advertising” adding, “two of the girls are wearing western-style gowns and two are wearing the Qipao (or Cheongsam as it is known in Cantonese). The Qipao hails from what was known as a ‘banner dress’ and the slits appeared in the late 1910s and 20s. I have found one unsubstantiated claim that the splits were put in to help dancing and an American male in Shanghai claimed it was because the Shanghai women realised they had better legs than Europeans!”

Yin Yin in the English language “China Daily” asserts that early yufenpei girls were demure, but that: “…this later generation of yuefenpai girls are usually depicted with curly hair or long, waving locks, a la mode. Most wore a tight qipao, slit at the sides from the thigh, that hugs the curves of the body. Chubby cheeks, powdered to give a rosy blush, arch eyebrows, red lipstick, an ample bosom, slender waist and full hips were all de rigueur. A roguish grin or chipper smile, accompanied by a glint of je ne sais quoi in the eyes, or just a wink, were all suggestive of more than just a change in how society saw pretty women in the 1930s.””