Ray Batchelor writes:
“The caricaturist, Georges Gousat, better known as “Sem”, was famous for savagely satirising French society. In 1913, he published “Tangoville sur Mer”, a book of cartoons based on what he saw (or what he imagined) while on a trip to the fashionable resort at Deauville. In among the famous figures shown dancing tango were three same-sex couples including this one of Nijinsky dancing with Gabriel Astruc, the financier and impresario.

It is a detail of a page showing an insight towards Sem’s attitude towards this same sex male couple is that the caricature shares the page with a jockey dancing with his horse and (possibly) Raimundo de Madrazo y Garreta dancing with a monkey dressed as a woman – all examples of ‘unnatural couplings’ perhaps? 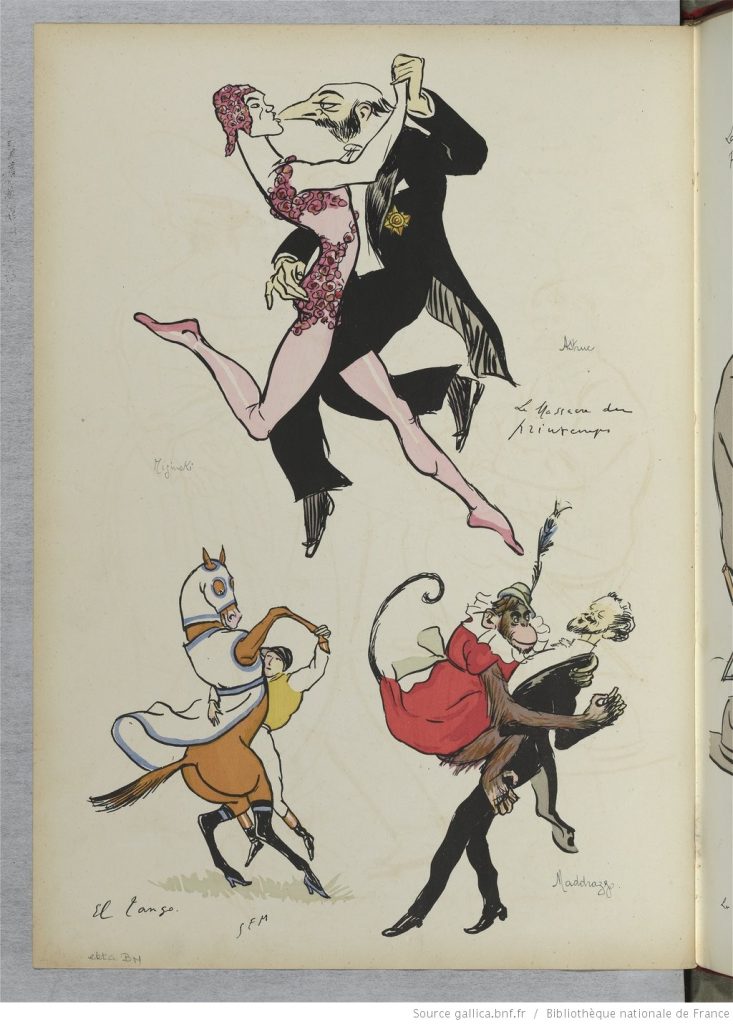 Juliet Bellow points out in “Modernism on Stage” that the cartoon is part of the outrage prompted by the Ballets Russes production of “Le Sacre du printemp” or “The Rite of Spring”. She writes:

“In reviews of Le Scare du printemps…critics directed their outrage about the ballet at the perceived influence of Jews and enjuivés (“the Jewified”) on the troupe. We can see this in an overtly anti-Semitic and homophobic caricature by Sem published in 1913…: an effeminate Nijinsky tangos with financier Astruc, who pinches Nijinsky’s bum and sticks his enormous phallic nose into the dancer’s mouth.”

Sem captions this “Le Massacre du printemps” or “The Massacre of Spring”.