Men dancing (?) tango with each other in Buenos Aires – date? 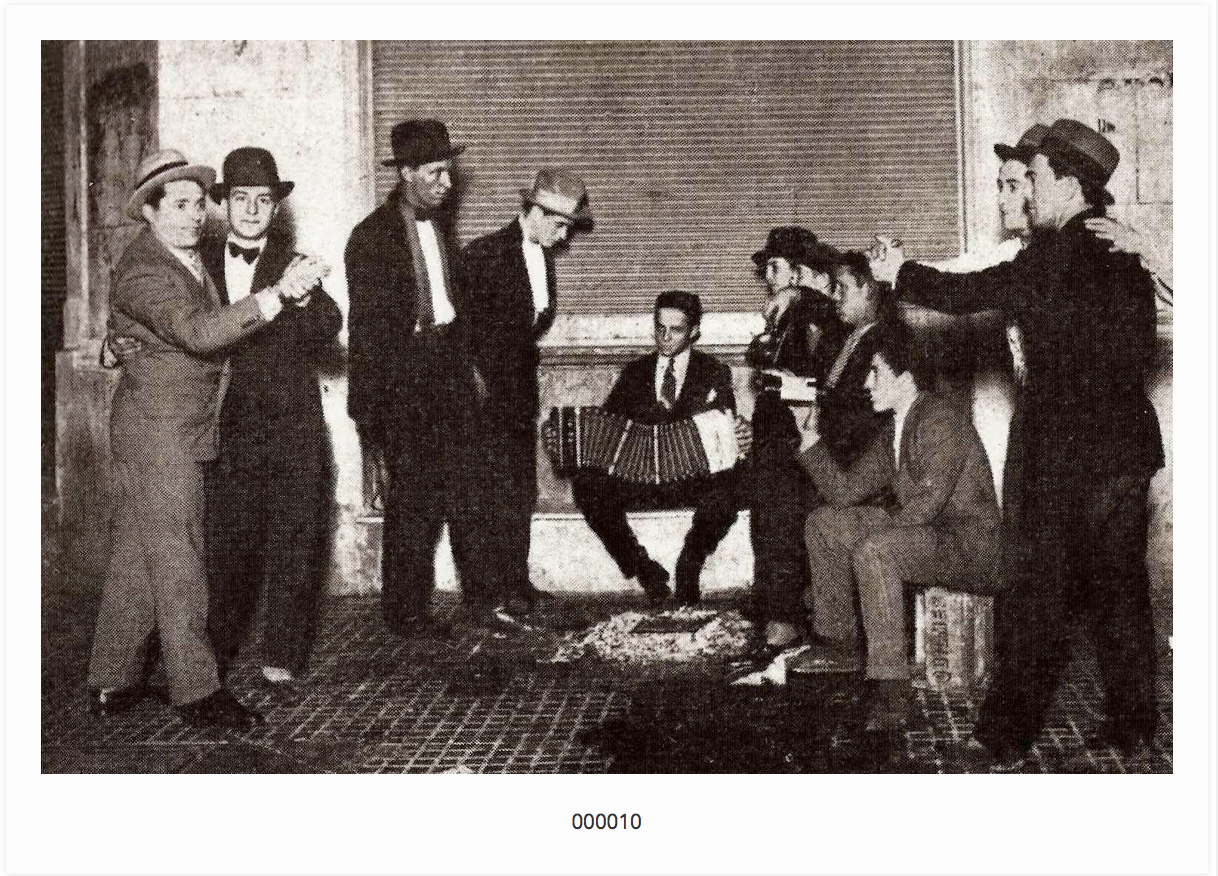 Ray Batchelor writes [and adds, 15 01 2020 – see below]:
“Downloaded from Wikimedia Commons. Beyond believing what most sources indicate – that these are men, that they are dancing (or practicing, or posing) with each other in a street in Buenos Aires at some time in the 20th century, I can say little about what is shown in this image with certainty. I believe an original photograph is held in the Archivo General de la Nación in Buenos Aires.

So, speculations: It looks like night-time – early morning, perhaps? They are on the pavement, in front of a  shutter pulled down, presumably a shop window. There are two couples of men, one couple on the left, one on the right standing in tango embraces. To the right of the left hand couple, two more men stand, hands in pockets. All of them are wearing homburg or fedora hats with deep crowns. – 1920-1935? A hat expert might help here. Is the man, second left wearing spats? All are well-dressed, in white shirts, bow ties or in one case, a tie, probably for a night out. They look relaxed. Are they actually dancing or ‘practicing’, or are they posing for whoever has the camera? The figure craned over the bandoneón player suggests little formal group posing, with only one figure – second from the left – actually looking at the photographer. The bandoneon player, a young man or juvenile is sat on the ledge of the window – no hat. ; another figure is sat on a crate with printing on the side drinking from/emptying what looks like a bottle of wine. Between the two are perhaps three further figures. All of these five of these look like juveniles. Six grown men; five juveniles or very young men. There must be one other person present behind the camera.

So, based on nothing but speculation, a scenario: perhaps this group have been out to a milonga and afterwards, with some leftover wine and a bandoneon, continued to dance, or to practice in the street.  These five younger men (including, possibly, a sixth behind the camera) might be with their six, more senior, male, tango mentors. Perhaps they are known to them from one of the all-male prácticas referred to in the literature (Denniston springs to mind)? Or perhaps the relationship is less formal? In the 20th century, photographs are acts of record.  Once a camera is produced, a half-hearted attempt is made by four of them to pose ‘correctly’ in couples by way of a record of this bibulous, light-hearted, late night instruction.
I doubt we can ever know exactly what is going on, but it would be interesting to know what information the Archivo General de la Nación has on the photograph, with a date and location, perhaps. Also, taking a photograph like this at night, must have been no easy task unless there happened to be bright lighting. So how and why was the photograph taken? More expertise needed here from a technical perspective.
In 2016, this image is important. As is the way in an age of digital reproduction, this highly suggestive image is perhaps the most reproduced one said to show “tango history”. Quite what it is said to show varies enormously depending on the views of the people appropriating it. Because so little reliable information is in the (Anglophone, at least) public domain, the range of meanings inferred is enormous, sometime contradictory and certainly warrants study.”

To which I add 15 01 2020: Despite my best efforts and the able support of staff at the Archivo General de la Naćion in Buenos Aires, sadly during a visit in 2018, I was unable to track down the digital version and obverse of this image. Their cataloguing system is archaic, subject based, on crumbling cards and not user-friendly. I will make a further attempt.

I have written about this and other allied images: