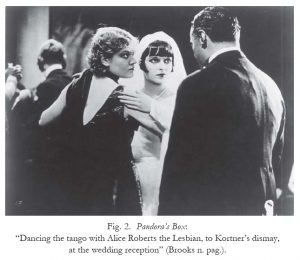 Ray Batchelor writes:
“The image and this text is taken from an academic paper, ‘Screening Modernity: Cinema and Sexuality’ by Candida Rifkind of York University in Ann-Marie MacDonald’s ‘Fall On Your Knees’

When Wedekind constructed his dramatic Lulu, Ellis’s theories had been expanded by other sexologists and had entered popular cultural discourse to the extent that Wedekind’s construction of Lulu as a narcissist is matched by his creation of a lesbian, Countess Geschwitz, as her constant companion and shadow (Hart 51). Andrea Weiss contends that these psychosexual theories are dramatized by the two female characters in Pabst’s film of the Wedekind play:

“The character of Lulu, played by Louise Brooks, is the embodiment of ‘primitive,’ polymorphous sexuality which brings about the ruin of herself and everyone she comes near, while Countess Geschwitz, played by Alice Roberts, is a lesbian artist who takes a passionate interest in her. Lulu’s innocence about her own sexuality and those around her makes her susceptible to, yet ambivalent towards the Countess’ overture (21).”

The Countess, often cited as cinema’s first explicit lesbian character, is a version of the predatory lesbian Ellis believed would try to recruit other women to homosexuality

Is this the first film representaion of characters intended to be lesbians dancing tango together..?”