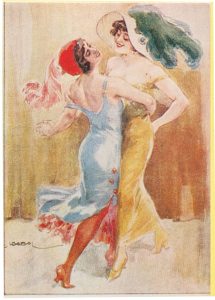 "The origin of those images, like the origin of the enthronement of tango as a universal fashion, is Paris. They are mostly anonymous pictures of women before the retina of a man one imagines to be complacent with the image of two women narrowing the distance between their bodies, something this dance encourages. One cannot see in them any self affirmation of feminine propriety, but rather, flattery or seduction toward the male spectator.[…]On one hand, Saphic flirtation or outright lesbianism was exercised by valid individuals belonging to circles of artistic luster wherein this was entirely admissible. On the other hand, the cabarets, in their obvious role as vias for sexual escapism, found their place in society. The image of tango between women is to drink from both springs and, from both, some images representing it have been handed down to us."J. Alberto Mariñas, They dance alone…[9]

Why this image, alone, of all images to illustrate Queer Tango and the section “The History of Queer Tango” in Wikipedia? Why none of the many images of men dancing with each other as well? Is this a function of the much commented on gender bias in Queer Tango with more activist women than men?