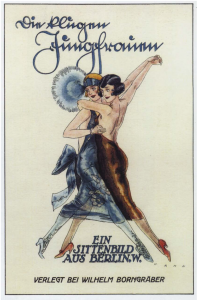 I suggest the pose of these dancers – and indeed, their physical intimacy, is consistent with tango.

“While the sexually aggressive monocle-sporting vamp, a figure often pictured alone, was frequently featured in lesbian publications…the motif of the dancing female couple was wildly popular among Weimar lesbians and the general public alike.
“As dance theorist Karl Toepfer explains, female couples “enjoyed special appeal” in Weimar because they “dramatized competing models of femininity and exposed conditions under which one model of femininity dominated or achieved equilibrium with another.”…Indeed, it comes as no surprise that “the homoerotic dimension” of this imagery “was not negligible in supporting their appeal.”…Otto Hahn’s dancing female couple…attests to the popularity of this visual motif. Hahn’s drawing appeared on the dust-jacket of Marie Renée Dumas’ 1924 novel Die klugen Jungfrauen: eine Sittenbild aus Berlin. W. (The clever maidens/virgins: a moral tale from West Berlin)…The novel’s title, paired with Hahn’s illustration, suggests the free-wheeling independence and sexual adventurousness of the modern New Woman. However, despite the close embrace of the women pictured, lesbianism is not the novel’s theme. This illustration, much like the 1929 photograph, Die Tänzerinnen Schwestern Karolewna (The Dancing Karolewna Sisters)…which was printed in Die Dame, at the time, the most popular German fashion magazine, are only two examples of countless contemporary images of dancing female couples that suggest, but were not intended to represent, lesbianism. Images such as these used the female couple as enticing and, on occasion, erotically suggestive visual decoration, which, to a degree, degraded and negated lesbian agency. One could argue that the proliferation of popular imagery in Weimar depicting female couples weakened lesbian expression. Nonetheless, these same images also represented an ‘image bank’ that significantly enabled and supported contemporary lesbian expression. Clearly, the producers of Berlin’s lesbian periodicals deployed images such as these to enhance sales and promote their public agenda.””