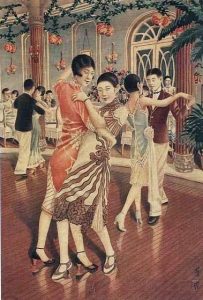 Ray Batchelor writes:
“Taken from an article by Walter Nelson and used by him as evidence of historical same sex dancing. http://www.walternelson.com/dr/same-sex-dance

No source is given by Nelson for the image so it is impossible to say which dance they are dancing. It could be tango.
Andrew David Field writing in his book “Shanghai’s Dancing World: Cabaret Culture and Urban Politics, 1919-1954” p. 27, says: “Tango arrived in Shanghai as the first new dance to infiltrate the city’s ballrooms during the [First World] war years…The Argentinean tango first appeared in Shanghai in 1913, when a pair of dancers performed it at a restaurant known for introducing new dance steps there. Its popularity soon gave rise to “tango teas” held in the western district of the International Settlement like those introduced in 1914 at the Astor House ballroom, which attracted over 200 guests. The tango continued to gain popularity in the Great War years, but soon, simpler dances such as the foxtrot and one-step eclipsed it in acceptance.”
https://books.google.co.uk/books?id=T6LRZylYgQgC&printsec=frontcover&source=gbs_atb#v=onepage&q&f=false
….which might mean that it is some other dance.
The bobbed hair of the women, apart from the leader in the foreground who may have a marcel wave, the smart hotel Interior (compare with the interior of the Majestic Hotel shown in Field’s book) the western dress of the men all point to smart, western modernity. The women are flat-chested, a body shape ideal fashionable until the late 1920s.
According to Juliette McDonald, Head of The School of Design at Edinburgh College of Art, this and next image in the Archive are “are examples of Yuefenpai – a calendar poster art genre which drew from western-style advertising.””