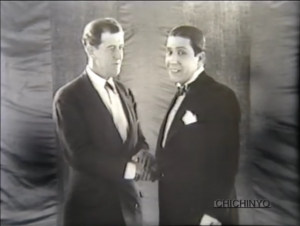 Ray Batchelor writes:
“This is not an old still image, but a screenshot I made from the short clip on YouTube of the 1930 film recording. It shows De Navas (left) and Gardel (right) chatting to each other just before Gradel sings one of de Navas’ songs, "El Carretero" recoded on disc in 1928.

Does it matter to us now in 2016 who was and was not gay (or LGBT, or queer) in 1903 or 1930?
Or that Arturo de Navas and Carlos Gardel might have been?
I am prompted by this 1930 film clip https://www.youtube.com/watch?v=OGEnq7OwCF0
and the discovery – new to me, but maybe not to you – that there was a warm friendship between Carlos Gardel and Arturo de Navas. Navas was first tango dancer to appear in photographs in a magazine in 1903 – and who arrestingly to our modern sensibilities – is shown in those photographs dancing with another man (“…as if it were normal” – a debate for another time).
There is evidence Gardel was gay. http://www.taringa.net/…/apunt…/18189091/Gardel-era-gay.html
De Navas also sang and composed tango songs. But was he gay? How can we know at this distance?
He and Gardel were friends. I note that this short biography of Navas asserts [in this Google translate of the Spanish]: “Also remember that Gardel struck a beautiful friendship with Navas, who asked for advice and greatly admired. César Ratti had that in the dressing rooms of theaters, Gardel Navas and used to spend two to three hours singing together, and Gardel’s favorite song was "Life of the road", composed by his friend.”
According to Spanish Wikipedia, he dressed beautifully:
“El cantor Carlos Marambio Catán escribió en sus memorias refiriéndose a los primeros años de la década de 1910 que Navas era una “gran figura de la canción, en esos años el más importante” y lo recuerda como “un hombre alto, delgado, muy acicalado, elegante, vestía un saco negro cruzado y unos pantalones de fantasía de perfecto corte inglés, botines de charol y un sombrero gris tipo diplomático, como le decían entonces.”1 “The singer Carlos Marambio Catan wrote in his memoirs, of the early years of the 1910s that Navas was a "great figure of the song, in those years the most important" and remembers him as "a tall, slender, well-groomed, elegant, wearing a black jacket and trousers of an imagined, perfect English cut, patent leather boots and a diplomatic-type grey hat, as he was then. "1
Does that make him gay? Obviously not and indeed, I am wondering if this is even a legitimate question to ask? But, if it is, do the answers have consequence for us now?
It might. I suggest a sense, however imperfect the match between present and pasts, that some people then may have felt in ways parallel to how we feel now has consequences for who we think we are and what we think we are doing.”