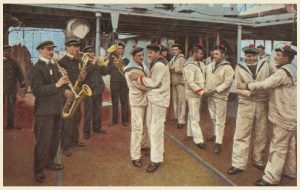 Once again, the reason for offering this image in this context is not that we can prove they are dancing tango, but that the image is used in the essay in French from which it came as evidence of a culture in many countries of male couple dancing among soldiers and – as here – sailors. The fact that the image is the subject of a postcard tells us something: that it was an image which was in some way admired or desirable. Those who produced thought people would buy it an send it to someone, provoking perhaps no ore than a good-humoured wry smile. If it were offensive, it would not be a commercial proposition.

The wider issues of the extent to which this cards point to such practices and indicate what they may have meant; the relationship of this, perhaps pre-existing same gender culture to the historical same gender, male, tango dancing in Argentina and Uruguay; and the precise ways in which these images are deployed in exploring or developing or manufacturing an historical dimension to contemporary [2016] same gender, gay or Queer Tango all need exploring at some point.”